“She has poured a great deal of herself into helping our students/cadets feel a sense of belonging,” Middle Township School District Director of Curriculum and Instruction, Dr. Toni Lehman wrote in her nomination letter. “They have given countless hours in service to our local community. Sue has set up lots of field trips and competitions for our cadets to enhance their skills. While I know all veterans are deserving of the gift, Commander Blood is the epitome of a selfless giver and this would be a special treat for her and her family who give so much to those around them.”

It didn’t take long for Dr. Lehman to receive the good news that the co-owner of Casa Di Amici would be traveling down to South Jersey to surprise Commander Blood with this gift. “When I read that nomination letter, I just knew it had to be her,” said Maggiore-Escribano. “Her work is so important to our military communities.”

Commander Blood was pulled from her classroom on Monday morning and escorted down to the gym by Principal West where she was surprised by a group of her cadets alongside her husband, Matthew, Christine Maggiore-Escribano, Casa Di Amici’s co-owner and Maggiore-Escribano’s fiancé, John, who is also a 15-year Army Veteran, holding a large sign with her name and the gift printed on it. She was awarded a free vacation and gift basket totaling over $4,000.

“Everyone just got together, Susan, in honor of you and everything you do for your community,” said Maggiore-Escribano as she stood around the cadets. “I can’t thank you enough for giving us the chance to award you with this great weekend getaway. Hopefully you can enjoy it with your family and friends, because that’s what it’s all about. The name of our business is Casa Di Amici, so ‘House of Friends.’”

Commander Blood mentioned that she’s excited to be able to share this experience with other fellow veterans as Casa Di Amici can comfortably host roughly twenty people.

“I’m a bit speechless and I’m honored because I know that there’s a lot of veterans out there that deserve this,” said Commander Blood. “I will definitely enjoy taking this time off. I’m not only grateful, but I am also honored. Thank you.” 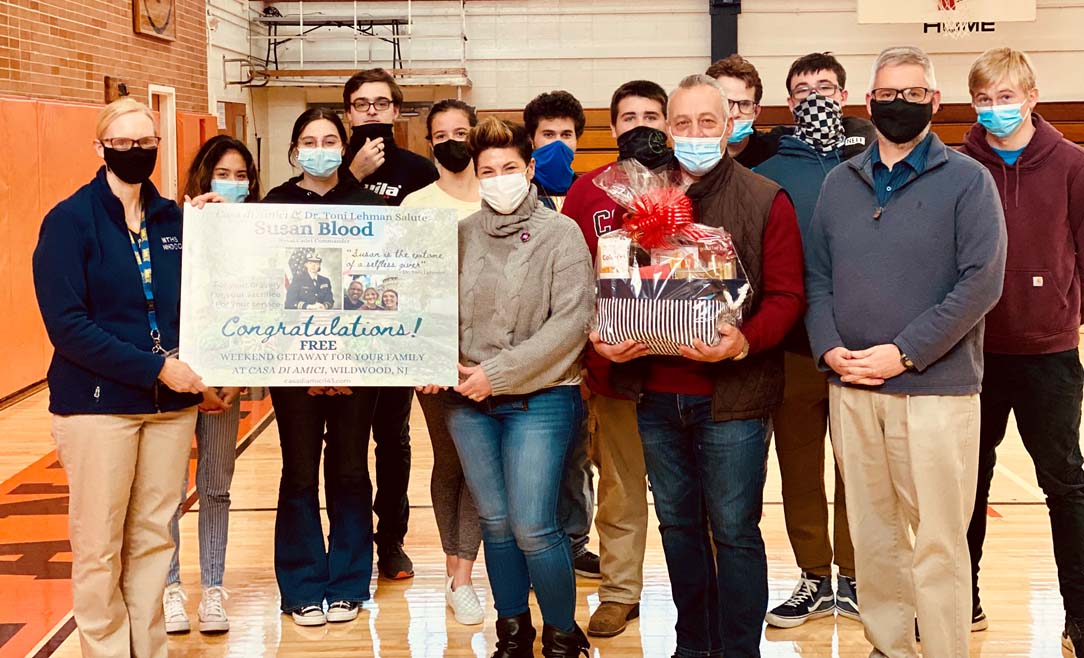