Middle Township School District’s Director of Guidance, Joelle Tenaglia, has been awarded the 2022 Cape May County Counselor of the Year by the NJ School Counselor Association. 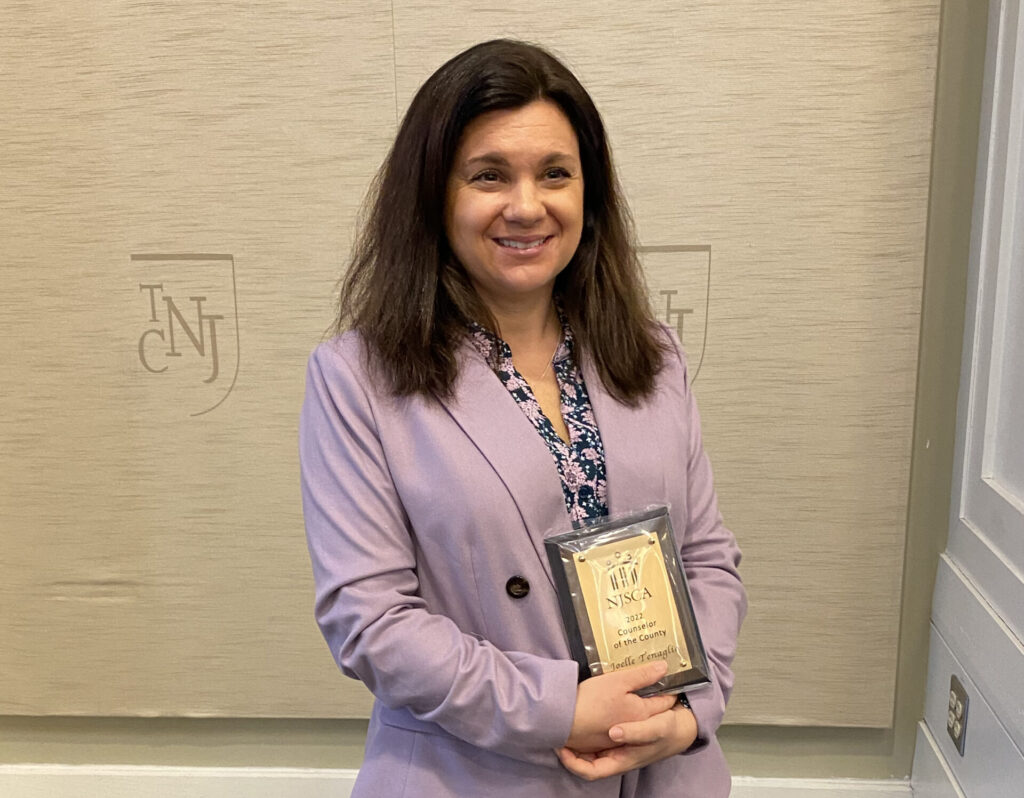 Joelle Tenaglia at The College of New Jersey posing with NJSCA Cape May County Counselor of the Year plaque.

According to the NJSCA, individuals selected for the County Counselor of the Year are chosen for their ability to provide students and staff with an effective school counseling program, focusing on academic development, career counseling, and personal/social support. They are also recognized as leaders in the school community, advocates for students, and collaborative professionals who “seek the success of the ‘whole’ student in school and in life.” Tenaglia was recognized during a luncheon in mid-March at The College of New Jersey, where school counselors from all over the state met to accept their Counselor of the County awards. School counselors were nominated by their colleagues and selected by their own county’s School Counselor Associations for this award.

“It is incredibly humbling to be recognized by my peers and thought of as worthy to be the award recipient,” said Tenaglia.  “I have spent my entire career as a student advocate and am most proud of being able to balance the needs of all stakeholders – students, parents, community, and school administration.”

Tenaglia says that she’s known she’s wanted to be a counselor since he was in grade school. “I had wonderful, caring counselors during my middle and high school years,” said Tenaglia. “In high school, I grieved the loss of my brother, and my school counselor provided me with resources and care at that time. I admired her. In fact, my college application essay was written in future tense as a school counselor looking back at what impacted my decision and work to get to that point in my career.” She says she’s continued to keep in touch with those who most impacted her career in counseling.

Tenaglia’s educational endeavors took off back in 2001 as a special education teacher in Salem County. She later became a school counselor and then director of guidance. She was actively involved in the Salem County School Counselors Association and served as president while she was the Guidance Director at Pittsgrove Township School District. After eight years in Salem County, she took time off to become a stay-at-home mom. When she returned to the work force, she landed a position in the Estell Manor School District as the Supervisor of Special Services, overseeing the guidance department and the child study team for nine years. In July of 2021, she began her career with MTSD.

“I am a believer to my core that all students have potential to be great, and it’s my life’s desire to encourage them and help them find what is most meaningful to them so they can get joy out of their life as a productive, contributing adult in our community as I have been fortunate to be able to do,” said Tenaglia.

“This recognition is something we knew all along based on Joelle’s dedication to the district and our students,” said Superintendent Dr. Dave Salvo. “I’m amazing by her ability to make positive changes for our community and we’re so happy to have her.”

The news of Tenaglia’s recognition came not long after Middle Township’s superintendent was awarded the county’s Superintendent of the Year award – two back-to-back wins for the township.

For more information on this recognition and NJSCA, visit: www.njsca.org.